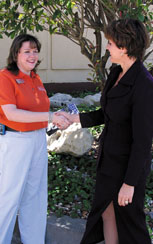 The Mission of The National Association for the Employment of People Who Are Blind is to represent and protect the collective interest of its member organizations to enable them to strengthen and maximize opportunities for people who are blind.  NAEPB is incorporated in the Commonwealth of Pennsylvania as a Not-for-Profit Corporation and is certified as a 501 (c) 6 organization.  It is a membership association of agencies from across the United States who share the common goal of providing employment for people who are blind.  It was founded in November of 2001 in Dallas, Texas.

NAEPB grew out of the General Council of Industries for the Blind, the body established in the Wagner-O’Day Act of 1938 to represent agencies employing people who are blind.  In the late 1990’s many members of GCIB believed that this organization had become ineffective in representing their interests to the National Industries for the Blind and the President’s Committee for Purchase.  It was also felt that the membership of GCIB had limited influence on the issues that were important to their agencies.  A work group was formed to examine alternative models; and when in early 2001 a disagreement arose between NIB and the GCIB over agency representation on the NIB Board, NAEPB was born.

NAEPB was specifically designed to empower the agencies that employ people who are blind to directly and decisively influence the policies and actions that affect these potential and current employees.  This level of participatory influence did not exist with GCIB.

Do NAEPB members really have a voice?

NAEPB is a fully representational membership organization.  The Board of Directors conducts the business of NAEPB and its members are elected from and by the membership.  Half the board comes up for election each year. Term limits guarantee the regular infusion of new leadership.  Officers representing each of the major functions of the organization (Operations, Services, Public Policy, and Base Supply Stores, and Treasurer) are elected from within the Board, and committees are organized under these officers.  Members who are not on the Board are strongly encouraged to serve on these committees – and it is from among these members that the future leadership is developed.

What does it cost?

New members pay a one-time initiation fee of $750 plus annual dues in an amount set by the Board of Directors.

How many members are there?

There are 90 agencies associated with NIB and most of these are NAEPB members.  NAEPB will continue to recruit all NIB associated agencies into its membership.

Can organizations not associated with NIB become members?

What will membership do for my agency?

It will give your agency a voice and an opportunity to participate at any level you wish.  Whether it is in public policy and legislative affairs, the increasingly complex markets for products and services, intra-agency conflict resolution, planning, distribution and channel management, service on the NIB or NAEPB Boards, or just plain networking, NAEPB presents you and your agency with a chance to make a difference that will benefit your agency and all those serving people who are blind.